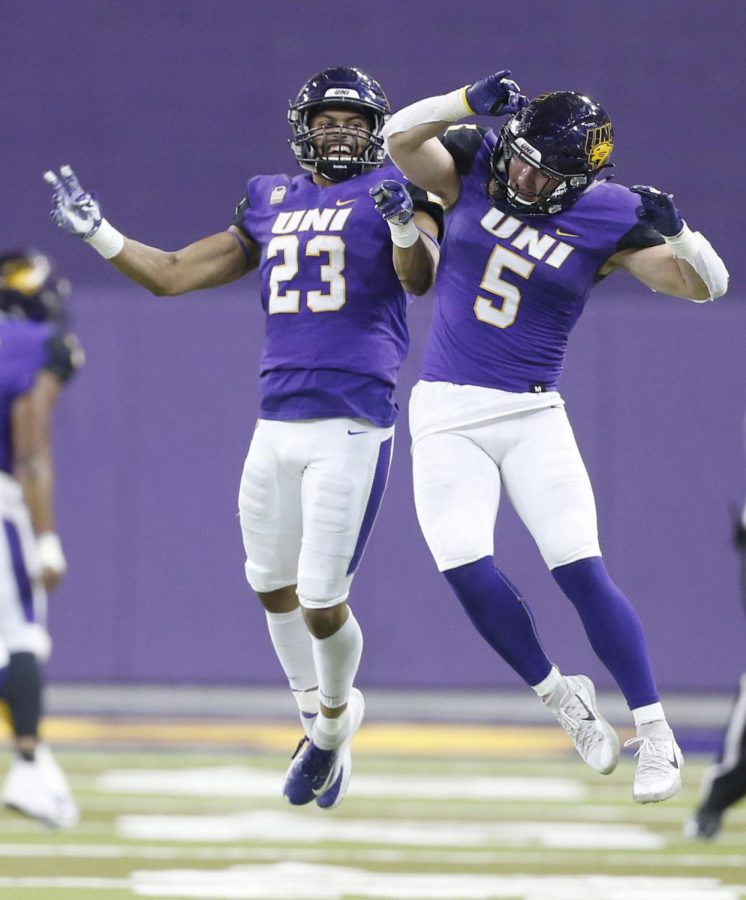 Northern Iowa's A.J. Allen, left, and Korby Sander celebrate victory as time runs out for Lamar during the Panthers' 2018 playoff win. Sander has made an impact during this return to the field this spring.

CEDAR FALLS – Missouri State appears to be a football program on the rise.

University of Northern Iowa head coach Mark Farley can already see the imprint Bobby Petrino is making during his first season as the Bears’ sideline general. Petrino entered Springfield, Missouri with a 119-56 record at the FBS level, including two stints at Louisville.

Missouri State visits the UNI-Dome for a 4 p.m. game on Saturday with a 2-1 spring record following losses to Oklahoma and Central Arkansas last fall.

“You see Coach Petrino through his players’ play,” Farley said. “It’s very similar to what you’ve seen other Coach Petrino teams be when you see them on the field. They exhibit a lot of the same traits. Even as early as he’s been with the program, he’s made a difference. There’s no question.”

Farley identified MSU quarterback Jaden Johnson as a catalyst within a turnaround for a program that finished 1-10 last season. Missouri State opened its spring schedule with a 30-24 road win at Western Illinois. The Bears then rebounded from a 25-point loss to perennial power North Dakota State with a 27-24 road victory last weekend at South Dakota.

Johnson threw for 278 yards and a touchdown, and gained 60 yards rushing against Western Illinois. He added 136 yards through the air and 50 on the ground during last week’s defensive battle against South Dakota.

“There’s no question the quarterback is their strength,” Farley said. “He’s an exceptional athlete and he’s got some exceptional receivers to throw to. He is definitely a difference maker for them and has won games for them and really helped them this season.”

UNI (2-2) will counter with one of the top defenses in FCS football. The Panthers rank sixth among teams that have played multiple games, allowing opponents just 258.3 yards per game.

When it comes down to containing the Bears’ receiving corps, safety Korby Sander is among the key players in UNI’s defensive backfield. Sander was the Panthers’ second-leading tackler in 2018 with 93 hits before suffering an ACL injury in the spring of 2019 that – combined with the COVID-19 pandemic delay – kept him off the field for two calendar years.

Sander is third within this year’s Panther defense with 27 tackles and leads a secondary that is relatively inexperienced within the program.

“We do a lot of things on the line of scrimmage,” Farley said. “It takes classroom time as much as it takes field time to get ready to do that. Korby is that person in the secondary that coordinates that call to everybody before he even has to do his own job.”

As he continues to get regular game experience, Farley notes Sander’s play has become more fluent and reactive, which in turn has improved his awareness and football savvy.

“We’re very pleased with Korby,” Farley said. “You just don’t run on the football field and start playing the way that you did two years previous to being at the top of your game.

“He has been through a lot of adversity to get back to where he’s at today. But I think these past games, each one, he’s becoming more comfortable with what he’s doing within the system.”

While UNI likely needs to win out in order to secure a place in the FCS postseason field, a Panthers’ team that has been clipped with a pair of close losses remains invested to find success.

“They’re two plays away from having a lot going right for them, yet they’re so resilient that they’re ready for the next challenge as we get ready for this week,” Farley said.