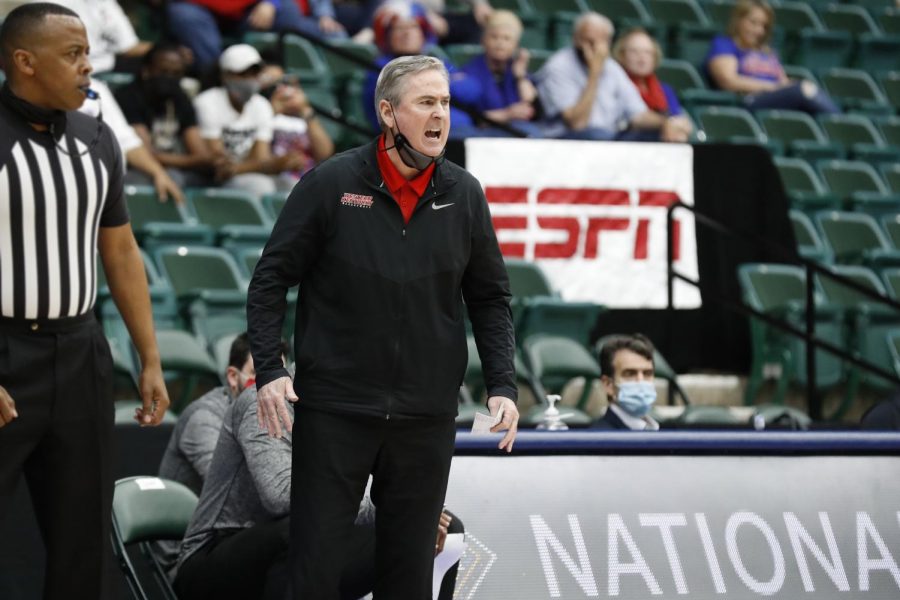 WKU head coach Rick Stansbury yelling at his team while playing in the NIT basketball tournament on March 25, 2021.

WKU’s (21-8) season comes to an end after losing to conference foe Louisiana Tech (23-7) in the quarterfinals of the NIT Tournament.

“Wasn’t the way we wanted to end our season that’s for sure. We knew it wasn’t going to be easy tonight, Louisiana Tech has a  really good basketball team,” head coach Rick Stansbury said. “They shot it really good, we didn’t anticipate that happening and I’m sure they didn’t either. The three-point line, 11-for-18, that’s the difference for the game.”

Rawls carried the Hilltoppers on his back early in the game, scoring WKU’s first eight points of the game while four different players got on the scoreboard for La Tech in its first 10 points scored.

Ledoux was the catalyst for the Bulldogs, scoring 11 of their first 24 points including 3-for-3 from behind the arc. He would end up scoring 14 of his 20 points in the first half.

For everyone else, it was about defense and three-point shooting and runs. La Tech had a 17-12 lead before going on a five minute scoring drought and only hitting one field goal in a six and a half minute stand. Although the Hilltoppers ended up taking the lead, WKU couldn’t fully capitalize as the lead was minuscule, leading to the Bulldogs retaking the lead.

The offense picked up as three-point shots were falling and the game of runs started. The Bulldogs went on an 8-0 run followed by a 10-0 run by the Hilltoppers, followed by a 12-0 run by La Tech that came all from behind the arc.

La Tech took a 39-31 lead into the locker room. They made 14 total first half field goals with eight of them coming from behind the three-point line at a 67% clip. WKU shot 5-for-14 from behind the arc.

WKU came out in the second half being aggressive, which ultimately lead to the lead being trimmed down to two. But that was as close as the Hilltoppers would get, as Ledoux and the Bulldogs would get the lead back up to nine.

“They were packing it in the paint. When we got in there there were about four people in there,” Hollingsworth said. “It gets kinda cautious when we get in there because you see so many of them you don’t know what to do. We just couldn’t overcome that hump.”

The difference stayed consistent until there was 1:05 left in the game when sophomore Isaiah Crawford got a bucket and the foul to push the lead to six, followed by a steal from freshman Kenneth Lofton Jr., putting the game to bed for the Bulldogs.