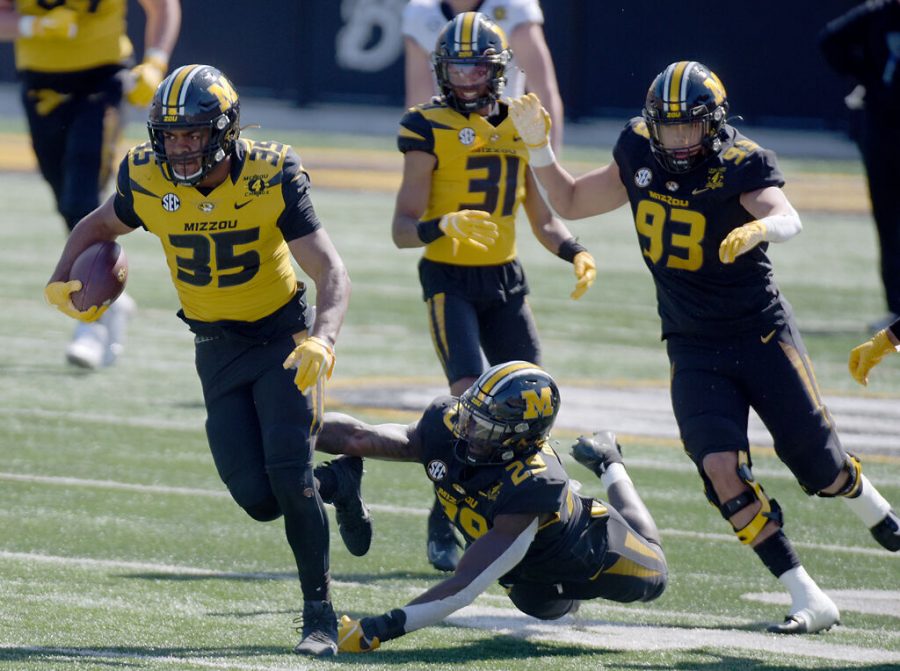 Running back Michael Cox breaks through the tackle of linebacker Jamie Pettway during the Spring Game on Saturday at Farout Field. Cox is a freshman from Atlanta, Georgia, and Pettway is a redshirt sophomore from Albany, Georgia.

But compared to what happens at Faurot Field in the fall, that’s where the resemblance ended.

Almost all 11-on-11 action came with limited contact throughout the final 14 periods of the 22-period practice. Points were awarded to teams based on players winning one-on-one matchups and anything else coaches deemed worthy.

The defense — clad in black while the offense wore gold — won 61-58. The black team picked up its final two points when linebackers coach D.J. Smith escaped the grasp of offensive graduate assistant Matt Linehan to score a 2-point conversion with only coaches in action.

In the Zoom press conference afterward, coach Eliah Drinkwitz crooned an off-key rendition of “One Shining Moment” in response to men’s basketball coach Cuonzo Martin’s performance of the same song earlier in the week.

So no, the afternoon did not provide any insight into what the Tigers might look like when the regular season rolls around in September.

“It’s all about individual player development, putting people in individual situations,” Drinkwitz said. “Don’t worry about the outcome or the result right now.”

The closest simulation to a normal football game came during the last 90 minutes of the afternoon. The offense and defense rotated between first, second and third teams while playing with limited contact. Tackling wasn’t allowed until the last few periods.

It took close to an hour for the offense to score a touchdown — still worth six points even amid the bizarre scoring system. Redshirt freshman running back Michael Cox scored from inside the 10-yard line to cap a drive from the backups. Quarterbacks Brady Cook and Tyler Macon each added a scores on short-yardage keepers on the next two series.

The closest the offense had come to the end zone up to that point was when cornerback Ishmael Burdine picked off starting quarterback Connor Bazelak near the goal line. The offense was allowed to stay out, but still couldn’t punch it in. Burdine also had a pass breakup on a bomb down the right sideline a few possessions later.

“Ish has really done a nice job,” Drinkwitz said. “I think all of our defensive backs, you know, we’re asking them to do something that’s a lot different than what they’ve done previously here. That’s to play with eyes on the quarterback and to attack the ball, to break on routes, pattern match read and do some different things. They still incorporate man-to-man coverage, but we’ve asked them to adjust.”

The red zone drill that preceded it offered the first tiny glimpse into the state of either unit. The offense began at the opponents’ 22-yard line against its corresponding defense. The first three drives ended with field goals, the last two turnovers on downs.

“We just gotta put points on the board,” receiver Keke Chism said. “In the (Southeastern Conference), field goals aren’t going to win championships. Just focusing on trying to put the ball in the end zone as many times as we can. That’s going to be the difference of trying to get where we want to be.”

It was Missouri’s first spring game under Drinkwitz, last season’s having been canceled due to the COVID-19 pandemic.

With previous coach Barry Odom at the helm, the event was much more structured. Teams got points by scoring touchdowns. The spring game was, well, a game. This year’s game also wasn’t at the end of spring practice like most seasons;the team will practice through Thursday.

That’s not to say there weren’t any game-like moments during the drills. Sophomore cornerback Ennis Rakestraw had a diving interception lining up across from Chism during a coverage drill. Freshman wideout Dominic Lovett had a diving catch on his back shoulder in the same period.

“We wanted to make sure we got the most out of every opportunity to practice,” Drinkwitz said. “This is practice No. 12 for us. We needed to make sure we got specific reps, see specific guys in certain situations and see how they would respond so that they could continue their growth and become the best version of themself as a player.”