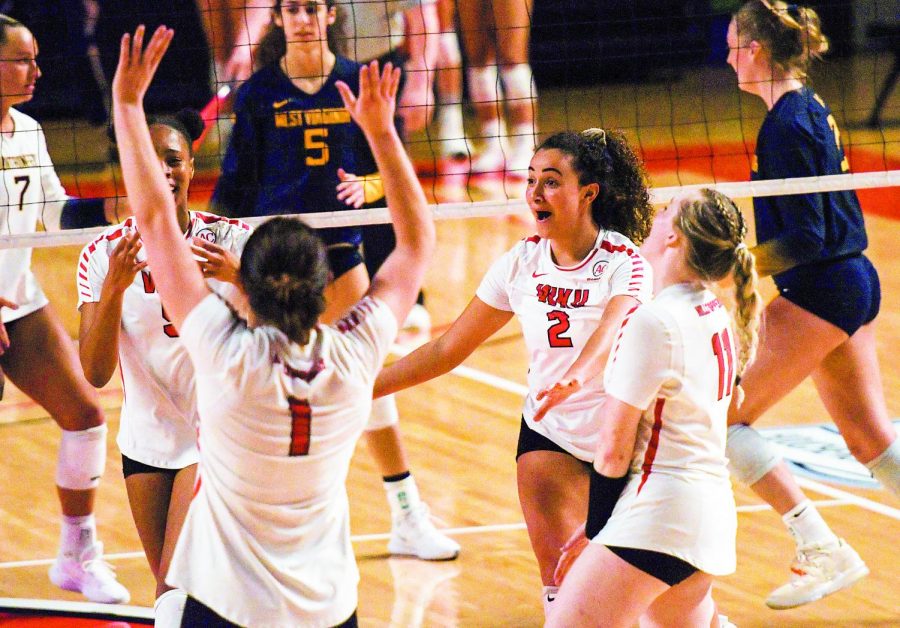 The WKU volleyball team celebrates as they extend their lead over West Virginia during the fourth set during the game in Diddle Arena on Mar. 12, 2021. WKU won 3-1.

This series will be the second to last of the regular season. Following these matches, WKU will face off against Old Dominion March 26-27. This will be the two team’s first-ever meeting.

Tournament play will begin April 1, with the championship concluding the season on April 3.

“Both of these last two opponents Middle Tennessee and Old Dominion are both fighting to be a part of the Conference USA tournament,” head coach Travis Hudson said. “So we’re going to be playing against desperate teams that are fighting for their postseason lives. It’s going to be a huge challenge to go out on the road and continue to find ways to win, and so we’re looking forward to that challenge.”

Hudson said that MTSU is a “solid team” and that the team shows depth in their offense, but they’re not one of the better blocking teams.

“From a physicality standpoint, if we handle the ball well, we should be able to get some things done offensively,” Hudson said.

Sophomore outside hitter Avri Davis said that the team is focusing on MTSU’s depth in the front row, focusing on every single spot and making sure WKU’s defense is well prepared for each hitter.

Both Davis and senior setter Taylor Bebout said that they are excited about the upcoming matches.

“For us it’s just any other game that we have to go play our best and win,” Davis said.

Bebout said that the team has improved a great deal this year.

“All the way from the freshmen who this is their first experience in college, all the way up to the old folks, the seniors,” she said. “It’s just great to see everybody improve.”

Sunday and Monday’s matches against MTSU will be available to stream on CUSA.tv.