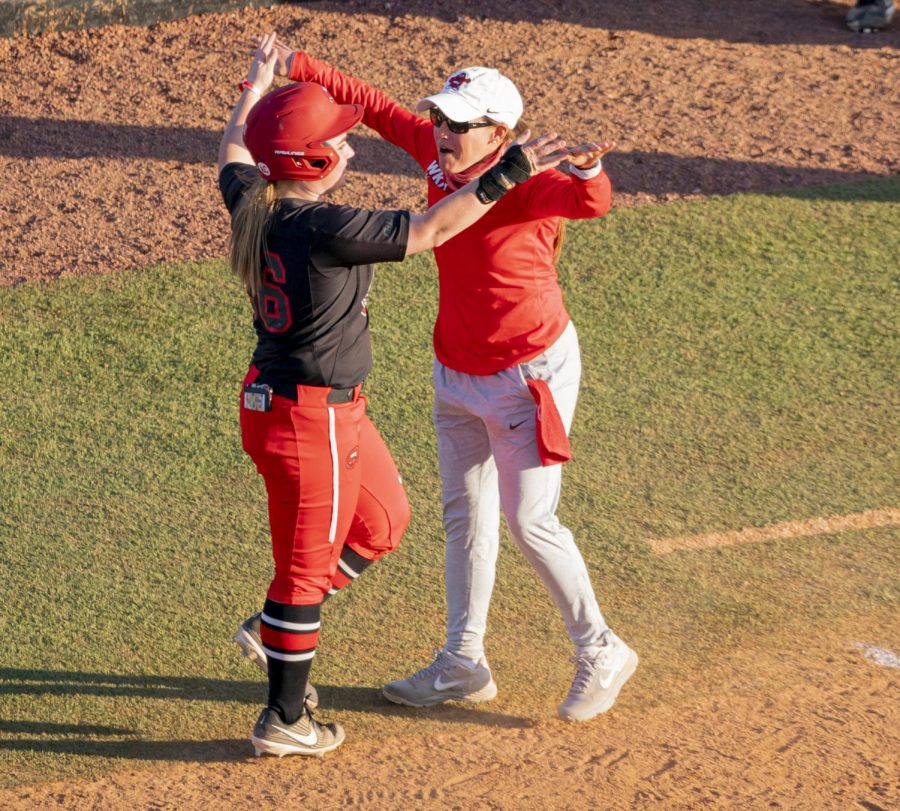 The team is firing on all cylinders as the Hilltoppers swept C-USA rival UAB over the weekend in a dominant fashion. Head coach Amy Tudor has been able to rely on a deep roster of players that seem to be putting the pieces together at just the right time.

“At this point, I feel like in these games this weekend multiple players stepped up in key moments,” Tudor said. “The numbers speak for themselves. Once we’re all clicking, I think that we have a really good shot to put up some big numbers.”

Redshirt senior and leadoff hitter Paige Carter has proven to be a consistent threat all year, owning a .406 average and .739 slugging percentage to go along with five home runs.

“It’s great to be in the leadoff position this year,” Carter said. “I know that I’m going to be on base the majority of the time […] and to start off that first inning really strong.”

Redshirt freshman Taylor Sanders has been the main offensive weapon for WKU, leading the team with a .904 slugging percentage and collecting six home runs, tied for best on the team. The Hilltoppers have also been deadly on the basepaths, with TJ Webster and Taylor Davis combining for 19 stolen bases. Davis leads the team in batting average (.446) as well.

The pitching staff has also been rock solid. Tudor has been able to dependon the arm of redshirt senior Kelsey Aikey to hurl five complete games and shoulder the bulk of the innings. Aikey has no issue taking on that responsibility, however.

“I love pressure. I do well in pressured situations,” Aikey said. “But whenever I’m handed the ball, I just go out there and do my best.”

Redshirt junior Shelby Nunn, redshirt freshman Katie Gardner and redshirt sophomore Kennedy Sullivan have all been dependable arms, with Nunn and Gardner each throwing a complete game and Sullivan leading the staff with a 2.30 ERA and 1.15 WHIP.

Aikey made it clear that she is very happy with the depth of the rotation this season.

“Whether you’re in the starting or closing position, we’re just good at coming in and doing what we need to do,” Aikey said. “If somebody is not doing good that day you know that somebody is going to have your back.”

Sullivan has proven she can swing a bat as well, owning a .400 batting average, a .800 slugging percentage and six home runs, tied for most on the team with Sanders.

The first of WKU’s final two matchups before conference play is a home game against in-state rival Kentucky on March 24 at 6 p.m. Kentucky is currently ranked ninth in the nation according to the USA Today/NFCA Coaches Poll and will be the toughest competition the Hilltoppers have had to face so far this season.

WKU has gone 8-16 against the Wildcats since 2000, and the Hilltoppers are 1-9 in the two teams’ last 10 meetings with each other. This will be the first meeting between the two programs since March 26, 2019, when the Wildcats defeated WKU 4-1.

A win would be huge for the Hilltoppers as they are 0-3 against Power 5 teams this season after falling to No. 18 Mississippi State twice and losing a close game against Louisville.

WKU will face opponents from the C-USA East division throughout conference play, and Tudor made it clear that every C-USA series will be important.

“You can’t take a game or a day off,” Tudor said. “At any moment something could happen. It’s [about] how resilient you can be this season. [All series] are critical for us at this point.”