Steven M. Sipple: Tuioti’s life in Lincoln working out well with help from some Hawaiian friends 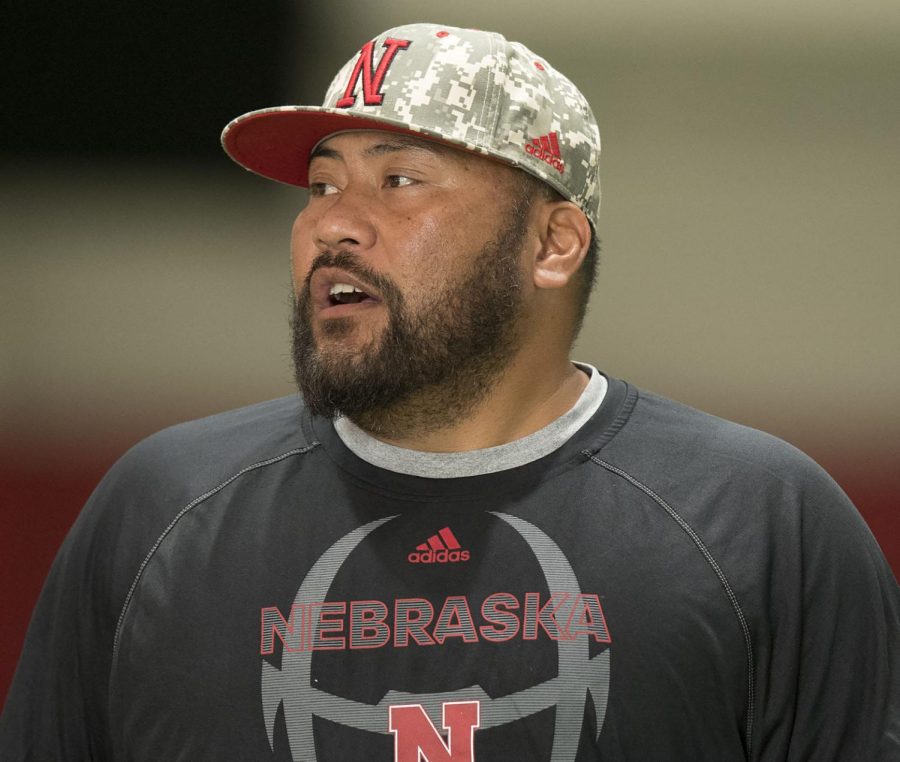 You can hear pride in his voice.

You can hear it as he shares details of a recruiting trip he took to Hawaii with Scott Frost and Mario Verduzco, you know, back when Nebraska (and other college) coaches could travel to visit prospects.

Pencil to paper: Sketching out an offensive two-deep for the Huskers ahead of spring ball

“One of the best parts of the visit was when we were up on Oahu’s north shore,” says Tuioti, Nebraska’s third-year defensive line coach. “I took Frost to the edge of a cliff. I told him, ‘Hey, this is where all the local kids come to jump into the open ocean.’ He was like, ‘Really?'”

It’s about a 25-foot drop to the water for Nebraska’s head coach.

“Frosty was like, ‘I’ll do it if you have some guys down there,'” Tuioti says. “So they’re down there waiting for him, and he jumps off. He got himself some street cred. So now when he goes to the north shore he can tell all the kids there that he jumped off Laie Point.

“Frosty’s a trooper, man. That’s one thing I learned. He’s not afraid of anything.”

Tuioti also made something of a leap in the winter of 2019 when he took the job at Nebraska, bringing to Lincoln a wife and seven children. Granted, he spent 2014 and 2015 in Cleveland as an assistant defensive line coach with the Browns and 2016 as Michigan’s director of player personnel. So he had gotten a big taste of cold weather.

Those stops were far different than Nebraska in one significant way, he says.

“I knew the football fan base here was strong,” Tuioti says. “But I didn’t realize how strong it was until I got here. I didn’t fully understand the level of passion. My eyes were open to it a little when I was at Michigan, just seeing its strong fan base.”

Michigan, however, is an hour’s drive from Michigan State. There obviously are plenty of pro sports in Michigan. But in Nebraska, well, there’s obviously not much to deflect focus from Big Red.

Creighton basketball? It hardly moves the needle outside of Omaha unless you’re an alum.

“For me and my family, it was like, ‘Holy cow, Nebraska football is king in the state,'” says Tuioti, who grew up in California and then raised his family in Hawaii. “Just seeing how it is here (in Lincoln) and experiencing it, it just motivates me to try to get our guys as dialed in as we possibly can to get these fans here fired up about football, get them proud of Nebraska football again.

“That’s what I’m hoping we can do when we get a chance to play and have the fans back here in the stadium.”

Born in Samoa, Tuioti grew up in Orange County, California, before becoming an honorable-mention All-Western Athletic Conference defensive lineman at Hawaii. That’s where he met his wife, Keala, who’s from Laie on the north shore of Oahu. They started their family there while he was a graduate assistant at Hawaii and later a high school coach. He considers Oahu home.

While Nebraska football has had a pair of players of Polynesian descent transfer in the past couple of years — defensive lineman Vaha Vainuku and Kanawai Noa (also from Oahu) — Ho’ohuli is believed to be the first Polynesian player to verbally commit to the Huskers out of high school since 1999.

Ho’ohuli gets the benefit of joining a rather pleasant Hawaiian club of sorts in Lincoln. The group also includes NU volleyball assistant coach Jaylen Reyes from Honolulu.

Yeah, the weather’s obviously a significant adjustment for Hawaiians, Tuioti says. No reason to get into the hellacious winter of 2020-21.

One key to keeping the Hawaiian student-athletes happy is a strong family atmosphere.

“That’s something we really tried to establish with Wynden and his family,” Tuioti says. “Coach Frost and coach (Erik) Chinander have recruited Hawaii for a long time, so they understand the culture, they understand the kids there, too. That’s a big help.

“At the end of the day, these kids love to play sports. I think that’s critical. Once they get connected with their team, that becomes their family. That keeps them going. But from time to time, they’re going to miss the food.”

That’s where Tuioti comes in.

“We definitely try to have some barbecues for Wynden and Bella, when her season’s over,” he says. “And Keonilei, she’s always coming by the house whenever she has free time. We’re just trying to take care of them the best we can.”

Those visits might involve some poke tuna. Frost shared his experience eating poke tuna while recruiting with Tuioti in Hawaii.

“We went up to the north shore, and I tried to put as many pounds as I could on Frosty,” Tuioti says. “He did an awesome job. He would wake up early in the morning and go run up Diamond Head (dormant volcano crater) down on Waikiki. While he’s doing that, I’m out on the water. I try to get in as much water time as I can. Then we’re in the car at 8 a.m. and going to recruit.

“We had Mario with us. But Coach Mario, he doesn’t eat. I tried to tempt him as much as I could with all the good food there. But he’ll only eat dinner.”

Tuioti let out a laugh. He loves those stories. Loves his family’s homeland.

You can hear pride in his voice.