‘Superstore’ Showrunners Promise a ‘Satisfying Payoff’ in the Series Finale 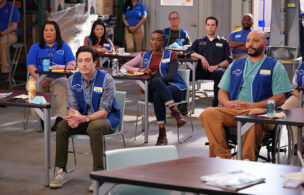 ‘Superstore’ Showrunners Promise a ‘Satisfying Payoff’ in the Series Finale

After six seasons, Superstore is closing. Thankfully, the workplace comedy set at big-box retailer Cloud 9 is still accepting returns: Former star America Ferrera is back for the finale!

Details on what brings her relocated corporate climber Amy Sosa home are being kept under the kind of tight security that would make prickly store co-manager Dina (Lauren Ash) proud. But exec producer Gabe Miller promises a lot of thought has gone into the two-part ender. See AlsoA ‘Superstore’ Spinoff Is in the Works — Who Would Star?
The series finale in spring 2021 may not be the last time you see some of the NBC comedy’s characters.

“We’ve had [cliffhanger] season finales where a tornado hits the store or a character is detained by ICE. It’s a whole different process to think of doing a series finale,” he says.

What we do know is that Amy’s reappearance will coincide with her jilted ex Jonah (Ben Feldman) and his Cloud 9 colleagues getting wind of inside info that inspires them to try to make the store seem perfect for one day. Miller and fellow exec producer Jonathan Green say the story lays the groundwork for “a satisfying payoff” designed to provide “a good landing place” for the employees and a sense of closure for the fans. “That was definitely important to us,” Miller adds. “What you want to do in a series finale is let the viewers who have come to love and care about these characters know that they’re going to be OK and [will stay] in each other’s lives.”