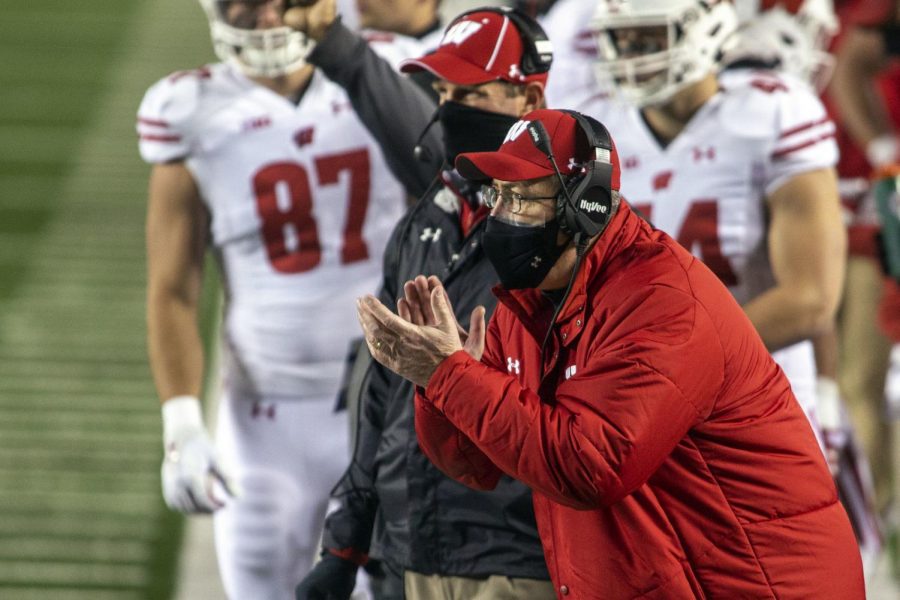 A return to normalcy is near for Paul Chryst.

The University of Wisconsin football team is set to return to spring practices on Tuesday, their first since 2019 after the COVID-19 pandemic wiped out last season’s sessions. He’s got a new staff of assistants set after hiring NFL veteran Gary Brown to lead the running backs. And he’s got a roster of players that experienced both highs and lows a year ago looking to soak in knowledge without the pressure of game day looming.

Speaking with reporters Monday, the Badgers’ head coach shared eagerness both for his new group of coaches and for returning to the practice field with his players.

“(I) certainly appreciate all the guys that were here and left, but the opportunities that we had and who we were able to add to our coaching staff, I think, are really, really good fits,” said Chryst, who’s entering his seventh season as UW’s head coach. “I’m excited for our staff, I’m really excited for our players and I think that’s where this spring will be nice for them to be able to get the opportunity (together).

“There is a different approach that you can take in spring ball. It’s got a little different pace to it, excited about all that.”

UW looked inward to replace Breckterfield, moving former UW lineman and strength and conditioning coach Ross Kolodziej into that role. Budmayr’s absence will be filled by Chryst, which allowed the latter to hire Hank Poteat to coach cornerbacks. Brown’s hire replaced Settle, who left the Badgers for Kentucky earlier this month.

The move divided coaching responsibilities for the corners and safeties between Poteat and defensive coordinator Jim Leonhard, respectfully, and Chryst will call plays on offense after Budmayr and associate head coach Joe Rudolph handled that last season.

Chryst said he wasn’t worried about balancing the roles of head coach, quarterbacks coach and play-caller.

“You just do it, right?” Chryst said when asked how he’d manage his duties.

“(I’m) not foreign to any of them. I think that helps and like everything, you also don’t feel like you have to do anything necessarily on your own. … It all started with what I thought was best for the program and for all of our players. The ability to add Hank Poteat to the staff … for that to really work meant for me to (coach) the quarterbacks. I’ve had experience with that, had experience being a play caller and now have had experience being head coach. (I) feel confident (I) can do all those and not compromise in any way.”

Brown was the only one of the new coaches Chryst didn’t have previous ties with — Poteat was a graduate assistant at Pittsburgh under Chryst. But he played in the NFL, as did Kolodziej and Poteat, and Brown coached in the NFL for a decade.

Chryst said Monday that former UW center Travis Frederick, who played his entire pro career with the Dallas Cowboys with Brown on staff, recommended Brown for the Badgers’ staff.

Getting his new coaches up to speed will be an ongoing process, as will getting players accustomed to spring practices — 44 players on the UW roster haven’t participated in them before. Chryst said that may lead to more meeting time for coaches to get on the same page, but that time together can be valuable.

“I think you also want to kind of create different opportunities for conversations,” he said. “Maybe you have a new set of eyes looking at something and maybe it’s a drill that we’ve been doing — is there a different way you can do it to get a little bit more out of the drill? Maybe something they’ve done before?

“For instance, with Gary, kind of find the starting point and then I think as he goes and gets to learn more about the offense, he’ll have ideas and suggestions, he’s got a ton of experience. I think Hank and Ross could bring the same defensively. You want to make sure that you’re hearing from them, and also I think that those conversations are good for the guys that have worked together. You’re always trying to find the best way to do something. We ask that of our players: ‘How can you find a way to get better today?’ And I think the same applies to us as coaches.”

Five storylines to watch for the Badgers’ offense this spring