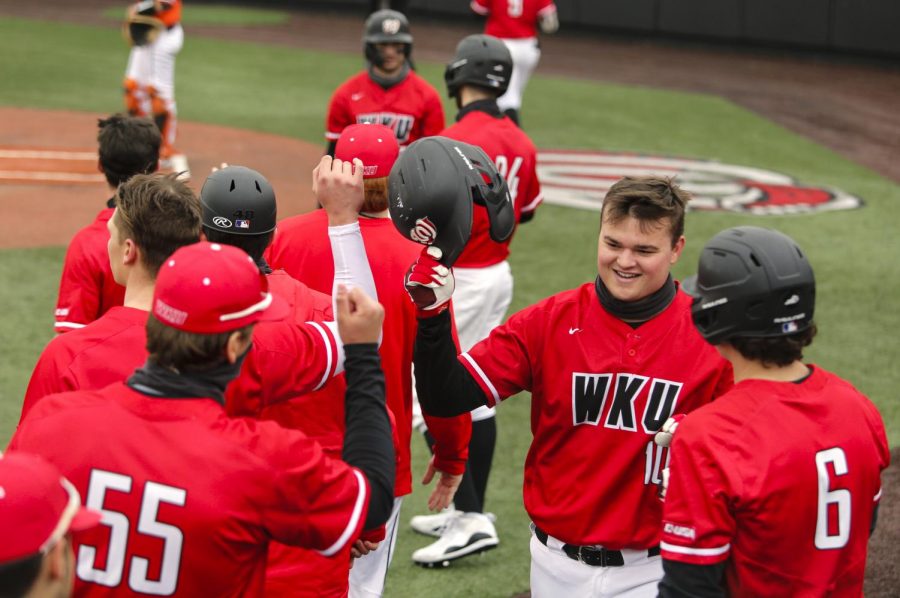 WKU infielder Davis Sims (10) is congratulated by his teammates after scoring a run during the game against the Bowling Green Falcons at Nick Denes field on March 14.

“Then you flip the script here on a Sunday and you walk out here with a 17-16 win, it’s truly unbelievable,” head coach John Pawlowski said. “I told our team to win four games on a weekend is unbelievable. It’s very difficult to do.”

WKU redshirt freshman Ty Crittenberger went 3-for-5 on the day including hitting his first homerun of the season in the bottom of the fifth inning.

Bowling Green State sophomore Kyle Gurney 6-for-5 while smashing his first homerun of the season in the ninth inning along with four RBIs.

Redshirt junior Michael Darrell-Hicks got the nod to start the series finale for WKU. He tossed for 0.1 innings allowing three runs on three hits.

“The number one thing for me was obviously we have to eliminate free bases,” Pawlowski said. “When you look at the first three games of this weekend series we were outstanding in that category, today we were not very good.”

For Bowling Green State, junior Gage Schenk got his third start of the season. He pitched for three innings allowing five runs on seven hits.

The Falcons started the game off hot by getting a walk then a single to put runners on first and third base. Sophomore Kyle Gurney then hit an RBI single to bat in the first run of the game. The next at-bat senior Adam Furnas hit an RBI double to extend the Falcons lead 3-0.

After the Falcons had nothing to show for in the top of the second, the Hilltoppers got the bats going in the bottom of the second frame. They started with singles before sophomore Jackson Swiney hit an RBI single to cut into the Falcon lead.

Then two batters later, sophomore Matthew Meyer batted in two runs to tie the game at 3 apiece. Schenk got out of the second inning with a pop-up.

In the top of the third frame, sophomore Anthony Toma grounded into a double play to leave two Falcon runners stranded on base. Then WKU’s sophomore Jackson Gray hit a double to start the bottom of the third frame. Gray scored on the next at-bat after a throwing error by sophomore Nathan Rose to give the Hilltoppers their first lead of the game.

Schenk would get out of the third inning, but not before senior Kevin Lambert batted in another run to extend the WKU lead 5-3.

In the fourth inning, both teams made pitching changes as WKU freshman Luke Stofel came in for Lollar and Falcon junior Griffin Parrill came in for Schenk. The Falcons went three up and three down in the top of the frame, while the Hilltoppers extended their lead to 6-3 courtesy of a sacrifice fly from graduate Davis Sims.

Both programs scored three runs apiece in the fifth inning. Redshirt senior Andy Gaytan hit a sacrifice fly to right field for the Falcons to knot the game up at six. However, the Hilltoppers returned fire in the bottom of the fifth.

Ty Crittenberger hit his first collegiate homerun on a three-run shot with two outs to extend WKU’s lead to 9-6.

“It felt good to get a good barrel and get it up into that wind pushing out today, so it definitely felt good running the bases.” Crittenberger said.

In the seventh inning, the scoring outburst continued as sophomore Ross Tyler tacked on another run for Bowling Green State to cut into the Hilltopper lead.

Then in the bottom of the seventh, the Hilltoppers added three more runs with an RBI double from Sims that scored two runs and a Gray single that scored Sims. WKU led 14-9 after seven innings of play.

The Falcons added three more runs in the top of the eighth inning to cut into the Hilltopper lead. Toma hit a sacrifice fly for the first run of the inning, then Gaytan hit an RBI triple to score one run and Rose added one more with an RBI double.

In the bottom of the eighth inning, Ray Zuberer III added three more runs for the Hilltoppers with a base clearing RBI double. WKU led after eight innings 17-12.

“We stuck to our plan, just hit the fastball,” Zuberer said. “They were throwing right there for us and we’ve faced a lot better pitching leading up to this game, so that got us ready for today.”

WKU surrendered four more runs in the top of the ninth. Redshirt junior Bailey Sutton came in for Vinyard to close out the game. Sutton surrendered a run and then posted a strikeout to claim the series sweep.

Up next WKU will host Bellarmine in Nick Denes Field on Tuesday at 3 p.m.