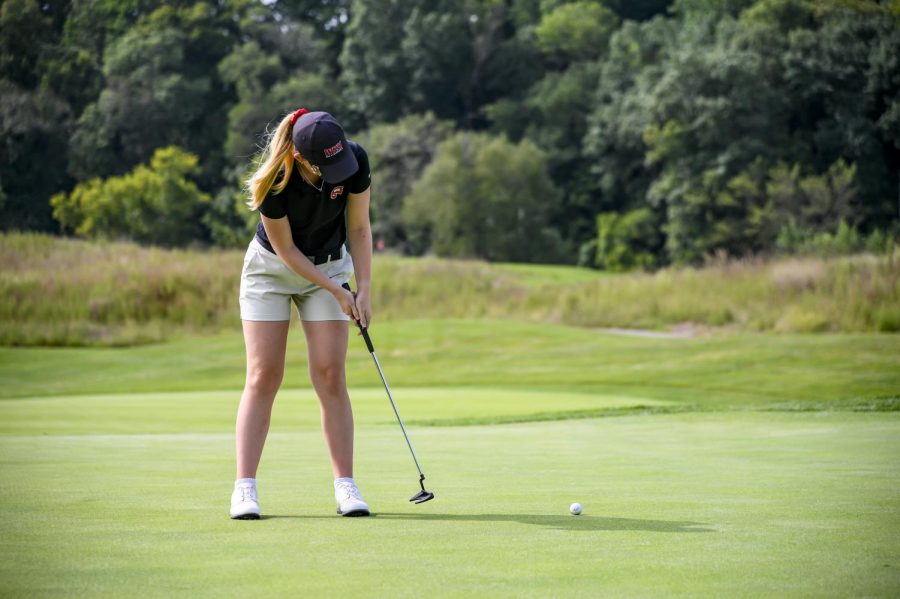 Megan Clarke putting at a practice round at Olde Stone Country Club.

After their fourth top three finish of the year, WKU took a step back in the Chattanooga Classic this week to placing No. 6 out of 13 teams.

Veterans in graduate Mary Joiner and senior Megan Clarke did all they could to help the Hilltoppers get back-to-back top three finishes with their 10-over 226 and 12-over 228 shooting performances, respectively.

“We were a bit all over the place throughout the tournament, but Mary and Megan showed some good consistency and leadership during the event,” head coach Adam Gary said. “We can always count on them to step up and their strong performances throughout this season prove that.”

The event was won by East Tennessee State University that accumulated a 23-over 887 in three rounds. The Buccaneers also had the tournament’s best individual performance from senior Tereza Melecka, who shot a 4-under 210.

This means the end of the regular season tournaments for WKU, leaving for a dual match against Marshall University on Monday before preparing for the Conference Tournament towards the end of April.

The beginning of this three round, two day tournament in Chattanooga, Tennessee at the Black Creek Club wasn’t great.

The Hilltoppers shot an 18-over 306, with no one on the roster scoring under par. The closest to that superior score was Clarke, who led WKU after round one with a 2-over 74.

Even Joiner struggled off the bat with a 5-over 77, as well as another upperclassmen in senior Olivia Reed who shot two strokes higher with a 7-over 79.

The second 18 followed shortly after the first, meaning that WKU had to play the second round directly after they completed their first 18 holes Monday morning.

Clarke and Joiner switched performances from round one, as Clarke struggled with an 8-over 80 and Joiner with an even-par 72 in the second round.

WKU also found themselves at No. 6 in the tournament heading into the final day.

The momentum push in round two couldn’t carry over into Tuesday, as the Hilltoppers shot their worst overall 18 of the tournament with a 19-over 307.

Clarke found her groove once again, clubbing her second round of scoring a 2-over 74 to give her a top-15 finish tying at that exact spot. Clarke has now finished in all nine WKU matches this season in the top 25.

Joiner got her second 5-over 77 on day three, but thanks to her second round it helped Joiner tie for No. 8 in the tournament. This was Joiner’s eighth top 20 finish of the campaign.

Despite the gruesome play, the Hilltoppers still managed to find a way to keep their No. 6 spot in the standings.

WKU now has one final act to go before trying to head into the playoffs playing their best golf, and it’s going to come on Monday when the Thundering Herd come to Bowling Green. The one day match up will take place at Indian Hills Country Club.

“Our seniors have given a lot to the program over the last four years or so, and we’d love to send them out to conference on a high note at home,” Gary said

Marshall comes into the event with just four tournaments under their belt, in which the Thundering Herd’s best placement has come at No. 8 out of 11 teams in the UAB Spring Invite two weeks ago. Marshall also competed in the Chattanooga Classic with WKU, in which they placed in the No. 12 spot.

The next event is on April 5 at the Indian Hills Country Club.