Saluki Football | 3 things to watch in No. 10 SIU/Missouri State 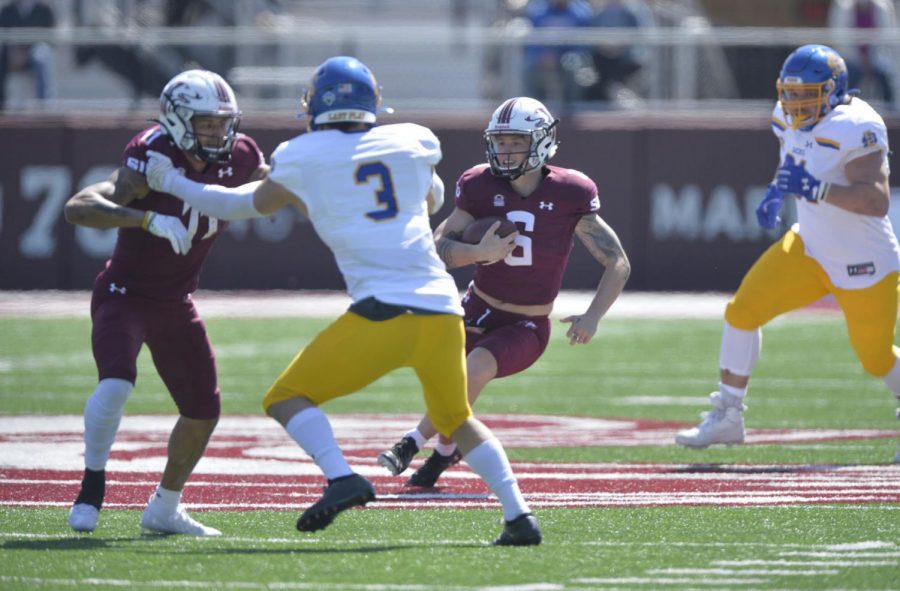 SIU quarterback Stone Labanowitz (6) scrambles during the second quarter against South Dakota State at Saluki Stadium on Saturday in Carbondale.

Tenth-ranked SIU (4-2, 3-2 Missouri Valley Football Conference) comes off its worst loss of the season, a 44-3 failure against fourth-ranked South Dakota State (4-1, 4-1). The Salukis turned around quickly after their first loss of the season, ending North Dakota State’s 39-game winning streak. We’ll find out Saturday if they can bounce back as well against the Bears (3-4, 3-1) when they square off at Plaster Stadium in Springfield, Missouri, at 2 p.m.

SIU leads the series against the Bears 22-20 but are only 9-11 against MSU in Springfield. Here are three more things to watch for when SIU takes on MSU:

No. 1 — Mystery quarterbacks: SIU is going with Stone Labanowitz, who was benched in the second half of Saturday’s loss to South Dakota State. MSU’s starting quarterback situation is a bit more cloudy, as Matt Struck started last week and coach Bobby Petrino said he thought Jaden Johnson was going to be available.

Petrino, the veteran, wasn’t giving any hints when he met with the media Monday. Petrino said they would get to practice, see what happens, and make SIU prepare for both quarterbacks, even though it was pretty clear the Salukis would do that anyway.

Labanowitz helped the Salukis knock off UNI earlier this season. Karé Lyles will be the backup.

No. 2 — SIU’s Jekyll and Hyde season: SIU’s 4-2 start has been a tale of two teams, the one that hangs onto the football and one that gives it away indiscriminately.

The Salukis have a minus-7 turnover margin for the season, but in their two losses, they are minus-6. SIU has turned it over nine times in its losses to North Dakota and South Dakota State, and forced three turnovers. MSU is seventh in the country in takeaways through seven games, with 11. Six of their seven interceptions this season are by two players, as cornerbacks Jeremy Webb and Montrae Braswell both have three.

Playing on the road, turnovers will play a big part in SIU’s success against an improving MSU squad.

No. 3 — Keeping the football: The Salukis want more explosive plays, so time of possession is not at the top of their list, but they are taking on the top third-down defense in the league.

Opponents are converting just 28.6% on third down against MSU this season during league play, and 28.7% for the season (14th nationally). SIU has been one of the most efficient teams in the country on third down, converting 53.3%, best in the league and ninth-best in the country. The Salukis want to control the football, and must protect their quarterback. MSU’s 24 sacks lead the league, and are just one off the single-season school record set in 2010.

SIU should get offensive guard Matt Chmielewski back from injury, which should help. Look for the Salukis to keep the ball on the ground as much as they can.