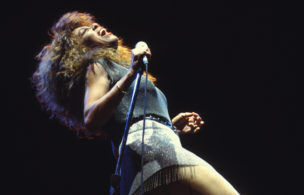 What’s talent got to do with it? Everything.

Also determination, resilience, and a survivor’s courage to speak out against domestic abuse, reclaiming a life and career that would soar to unimaginable heights. “I had an abusive life. There’s no other way to tell the story,” concludes the still-glam octogenarian superstar Tina Turner in HBO’s Tina, a triumphant biographical documentary.

On stage, she has always been electrifying, as the blazing core of the Ike & Tina Turner Revue in the 1960s and ’70s before achieving global superstardom on her own, filling arenas and fulfilling her professional dream — “to be the first Black rock-‘n’-roll singer to pack places like the Stones.” A softer, more reflective side emerges in Tina, which begins with her happy ending, as she candidly speaks from her palatial estate in Zurich, Switzerland.

She recalls first revealing her grim history to People magazine in 1981: the beatings she endured while married to Ike, her financial struggles following the divorce. “I was living a life of death,” she says in tape recordings. “I didn’t exist. But I survived it.” In what playwright Katori Hall describes as “a coming of age at 40 years old,” Turner reinvented herself into a rock goddess — the concert footage is as explosive as ever — while trying to put what she felt as the curse of her past behind her: with an autobiography, followed by the Oscar-nominated film What’s Love Got to Do With It, which only magnified her iconic status as a symbol of strength. The film ends with a victory lap as she returns to the U.S. to attend the Broadway opening of Tina: The Tina Turner Musical, the bio-musical which was still packing the house with Tony buzz for its star (Adrienne Warren) when the pandemic shut everything down.

Then and now, the real Tina Turner is simply the best.