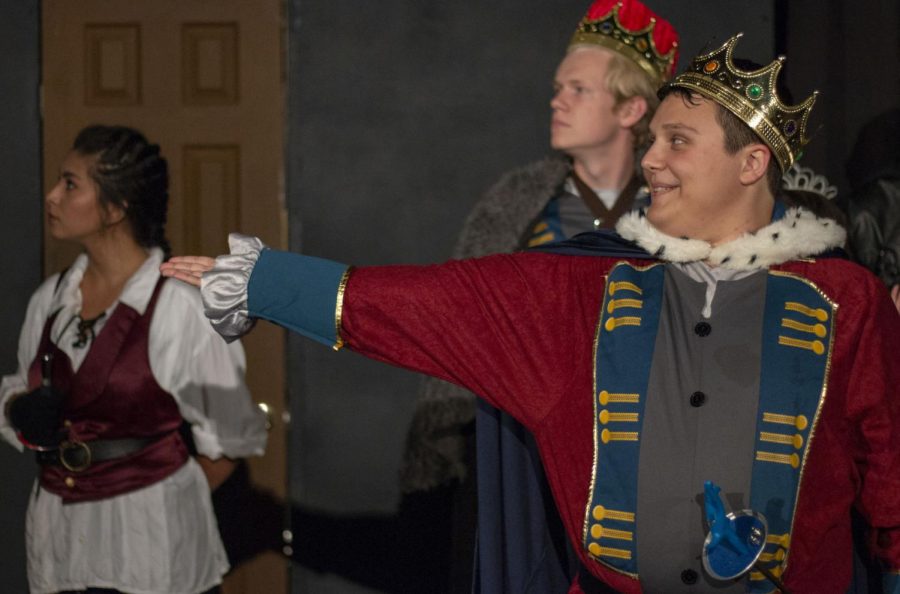 No Refund Theatre holds a dress rehearsal for their version of "The Princess Bride" in the Forum Building on Wednesday, Oct. 3, 2018.

Colton Lucas | For the Collegian

There’s no business like show business, even during a pandemic.

After Penn State implemented regulations last spring to stop the spread of the coronavirus, many of the university’s performing arts organizations had to temporarily shut down. Productions, rehearsals, events and even auditions were canceled — and plans for their return remain uncertain.

Taking the final bows of the 2020 spring semester, many organizations were left wondering how they could navigate the stage if the virus continued to surge.

“It was terrifying,” said Bridget Hartshorne, president of the Penn State Student Performing Arts Council. “I think that, once we got into May, I really realized how much I needed performing arts, and I got really worried about other performers who were feeling the same way, and that was when it kind of hit me — it wasn’t going to be over any time soon.”

Hartshorne (junior-early childhood and elementary education) said despite the pandemic, many organizations were able to persevere over the past year and produce virtual performances that went beyond what she could have imagined.

The Singing Lions, a vocal and dance performance ensemble, produced one of these virtual performances during fall 2020, which Hartshorne said was “absolutely incredible.”

Not being able to perform in person meant the organization had to get creative, though. Members sent in individual videos of themselves singing different voice parts for several songs, and, using various software, the group was able to merge the videos to make it sound as though everyone was singing at once.

Jordan Emely, president of the Singing Lions, said the nearly 43-minute concert was a major success for the organization.

“We recorded from our individual spaces,” Emely (graduate-higher education) said. “Our members mixed it, our members put the videos together… Doing that virtual show was a way for us to be able to say like, ‘Hey, we put out something — we put content out. We’re still doing it.’ And I think our org was really thrilled by that.”

The virtual concert, titled “We Are… Grateful,” and other performances can be seen on the group’s Youtube page, SingingLions.

In February, Penn State announced its four-phase coronavirus response plan for in-person student activities. Its creation was meant to open doors for student organizations, but it also meant those in the performing arts had to wait until phase two to hold in-person rehearsals.

When the university announced its decision to enter phase two, several groups jumped at the opportunity to practice and perform beyond the virtual boundaries of Zoom.

No Refund Theatre immediately drafted plans to hold several shows in person. The limited number of performances and events the organization is now able to host, both in person and virtually, is a stark contrast to its pre pandemic repertoire, according to Tori Gamel, NRT’s public relations director.

Before the pandemic, NRT was producing upwards of 30 shows per semester, but NRT was only able to schedule a handful of in-person shows this spring.

Gamel (junior-archaeology and classics) said the limitations were challenging for its members at first, but the group was able to come together and brainstorm new ways to perform.

“The rug was pulled from underneath us,” Gamel said. “When we [were] told fall semester would be online… We opened up the floor to our committee and our club and [were] like, ‘You can propose anything and we will try to do it.’”

Since then, the organization has been able to regularly produce virtual content, including stage readings, scripted shows written by NRT members, a Halloween murder-mystery and a podcast — which was created after the start of the pandemic.

NRT is currently rehearsing four shows that will occur throughout April: “The Last Five Years,” “Qualities of Starlight,” “Gruesome Playground Injuries” and “NRT Not Live.”

Gamel said the in-person performances will also be available to watch through a livestream, and additional information and links to the performances can be found on NRT’s Facebook and Instagram pages.

Though the pain of not being able to perform in person is a reality for many, Jordan Fritsch remains optimistic that better days are ahead.

Fritsch (sophomore-public relations) is a member of the dance troupe Tapestry and serves as the dance community relations chair for PAC.

Fritsch said she wants people to understand that, for some people, the performing arts are their lives, and the pandemic has taken that away from them. She said while performers everywhere are having a difficult time, there is still hope the fall semester will allow performers to get back to doing what they love.

“I have a strong hopeful side,” Fritsch said. “I really do believe that we can get to the point where — maybe it’s not full capacity, maybe we don’t have everybody taking part in these performances — but I really do see a point in the fall… that we get back into performing, and get back into our groups.”

Fritsch said that, while Tapestry has not been able to perform since last year, its members have kept a strong bond through continued virtual meetings and check-ups.

Jessica Naegele — one of two members holding the acapella community relations position for PAC and a member of the Pennharmonics — said it is important for the Penn State community to continue showing support for the performing arts during the pandemic.

Naegele (junior-marketing) said people should remain hopeful and continue engaging with performing arts groups in any way they can. Staying updated on performances and events, following social media accounts, and joining these organizations are some ways to show support, according to Naegele.